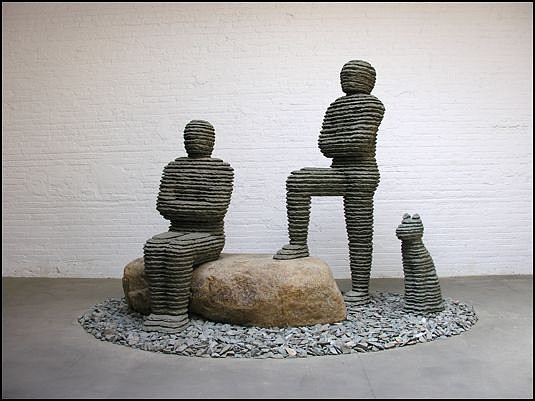 Israeli-born Boaz Vaadia is best known for the figurative sculptures he made by carving and stacking stones that he found in the area surrounding his New York studio. Vaadia said, “I work with nature as an equal partner…That’s still the strongest thing I deal with today, that primal connection of man to earth. It’s in the materials I use, the environments I make and the way I work.” In 1975, Vaadia relocated to New York where he studied at the Pratt Institute. He began collecting materials such as slate, shingles, bluestone, and boulders after he discovered an ongoing construction project near his studio in SoHo. As workers ripped up the bluestone sidewalk, Vaadia carried the discarded material to his loft, where he worked with a hammer and chisel to further expose the sedimentary layers of the rocks. Inspired by the stratified layers, he began creating sculptures that echoed the natural composition of his materials. Primarily named after biblical figures, his public works can be found outdoors in parks and in front of public buildings, as well as in the collections of institutions such as the Metropolitan Museum of Art, San Francisco MoMA, the Bass Museum of Art, and the Tel Aviv Museum.